IN THE BEGINNING was Stark Raving Theatre, a little company with the audacious goal of producing nothing but new plays.

Check that. In the beginning was New Rose Theatre, with its long and fruitful sponsorship of new plays set in the Northwest by Charles Deemer.

Check that. In the beginning was Storefront Theatre, which made up new plays like an artisan baker whips up fresh new pastries every morning.

Check that. New plays have always been a part of the mix on Portland’s theater scene, but never with the frequency and impact of the past 10 years or so, when companies across the city have made it a prime goal to create new work. And part of the credit for that goes to JAW, the Just Add Water festival, Portland Center Stage’s annual summer development workshop for writers from hither and yon. The festival has focused on national playwrights, with a few locals and auxiliary programs, and a good percentage of its shows have gone on to full production at Center Stage, other Portland theaters, or companies across the country.

This year’s process has been going on behind the scenes for more than a week, and the main event arrives today through Sunday, July 29-31: staged readings of three new plays, plus workshop productions of two shows that’ll have their world premieres in Portland Center Stage’s 2016-17 season: the group Blitzen Trapper’s new “musical event” Wild and Reckless, and the solo show Lauren Weedman Doesn’t Live Here Anymore. The three new scripts: Kevin Artigue’s The Forcings, Mia Chung’s Catch as Catch Can, Nathan Dame’s The Saints.

JAW events are free, and everyone’s welcome. The lowdown is here, including details on each of the new plays. Check it out and head on down.

MADCAP IN ALGIERS. “Pizza, bathing suits, peeping-Tom camels, selfie-sticks, a chorus dressed in modest underwear and a ruler in a loin cloth” – of course Angela Allen is talking about the opera in her Oregon ArtsWatch review. In this case, about Rossini’s The Italian Girl in Algiers, which Portland Opera, cavorting in the intimate Newmark Theatre, has turned into “a topsy turvy playground” of contemporary musical theater, and which is closing the company’s current season on a high note. Allen continues: “The comic timing and dazzling singing of the cast, most of whom were making their PO debuts, capitalized on Rossini’s elegant, fluid music. The Italian girl, Isabella, sung emotionally by the curvaceous mezzo-soprano Aleksandra Romano, was the undisputed star and plot game-changer, but her surrounding and supporting cast also had many moments to shine.” All in all, it’s boffo. And it continues for four more performances: tonight, Sunday afternoon, and August 4 and 6.

HANDS UP: 7 PLAYWRIGHTS, 7 TESTAMENTS has been filling houses in its recent performances in Portland, and it winds up – at least, for now – with encore performances tonight and Saturday at Artists Rep. If you haven’t seen it yet, you can get on the wait list by sending your name, phone number, and number of tickets needed to boxoffice@reddoorproject.org: both shows are sold out. Directed by Kevin Jones of the August Wilson Red Door Project, Hands Up consists of monologues by seven playwrights – Nathan James, Nathan Yungerberg, Idris Goodwin, Nambi Kelley, Glenn “NSangou” Gordon, Eric Holmes, Dennis Allen II – commissioned by The New Black Fest in the wake of police shootings of black people across the nation. The conversation continues, and it’s filling the seats. 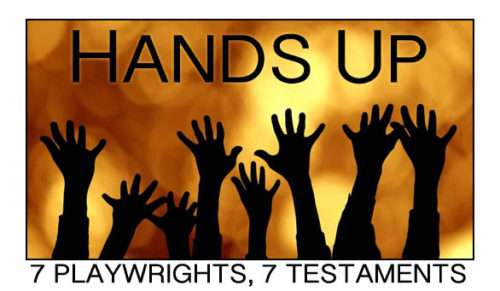 Florine Weiss, who for years ran the old Firehouse Theater, in the building that now houses the Portland Actors Conservatory, died on July 22 at age 84. Firehouse was run as a branch of the city parks department, and it kept a busy schedule. Lots and lots of actors and directors learned the game from Florine and Firehouse, which made the space’s conversion into an acting conservatory seem like the next logical step. Read Florine’s Oregonian obituary here.

And B.J. Seymour, a prominent gender identity counselor who did a lot of acting in community theater for many years and also hosted a poetry program on radio, died May 22 at age 86. A tiny woman, she had a personality that would have burst the seams of someone three times her size. She lived for many years in a little apartment along the South Park Blocks, and I used to run into her frequently in the park. It’s a cliche and almost always an exaggeration to say that someone beams, and yet B.J. beamed. We had a lot of conversations in the park, always enjoyable ones, and I’m sorry we won’t have more. Read B.J.’s Oregonian obituary here.

a Portland-centric arts and culture blog